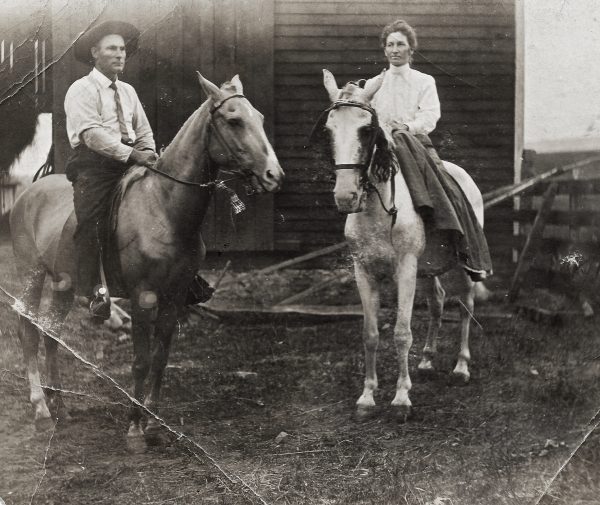 Tressa and Frank Yohe on the farm at Marysville Valley, Pennsylvania

Tressa and Frank Yohe on the farm at Marysville Valley, Pennsylvania, 1910s.

<
>
Album: Yohe // Pennsylvania & Arizona
The Yohe family trace their history from the mid-19th century to the present day, across the east and south-west of America.

The Yohe family trace their history from the mid-19th century to the present day, across the east and south-west of America. Gretchen Yohe Gutshall Beyers’ ancestors were French Huguenots who arrived in the New World in 1737. They made their living in the fur trade in what were the newly emerging French and British colonies in North America (now Canada and the United States of America). There is a rich mixture of ethnicity in the Yohe family tree, which includes French, Irish and Native American ancestors. Great-great-grandmother Anna Catherine Matchett’s family arrived from Ireland to the post-revolutionary American colonies in 1820 to settle in Pennsylvania, where her descendants made their living as farmers.

The Yohe family farm was located in the area where the pivotal event of the American Civil War, the Battle of Gettysburg, was fought in 1863. In the days before the battle, great-grandmother Elizabeth Gardner Yohe gave buttermilk to pillaging Confederate
rebels, distracting them from her horses hidden in the farmhouse basement. Her husband Joseph Sheaffer Yohe only learned of her quick-minded pragmatism when he returned home safely after fighting with the Union Army. A studio photograph of Elizabeth and her husband Joseph dates to the 1890s. Elizabeth’s matriarchal strength continues down through successive generations of Yohe women.

Photographs of great-grandmother Tressa and her husband Frank combine studio portraits with candid family photographs of life on their first farm in Marysville Valley, Pennsylvania. The close-knit, playful relationships between their daughter Maria (mother of Gretchen and grand-mother of Michelle) and her five brothers are captured in an extensive series of photographs from the Yohe family’s second farm in Perry County, Pennsylvania. Contemporary photographs show Gretchen on horseback near her ranch in the Arizona desert. Her daughter Michelle returned to Ireland to write her doctoral thesis on the conflict in Northern Ireland and continued to live in Belfast and South Armagh for a further 12 years. She has since returned to accept a faculty position at the Arizona State University in Tucson, Arizona.

The Yohe family photo collection includes many photographs of their ‘extended family’ of mules, goats, and prized Percheron draft horses, demonstrating their strong and continuous connection to the land.