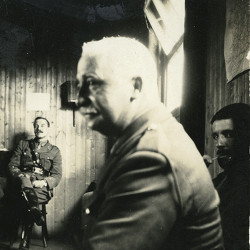 The anniversary of any significant event, especially a centenary, offers the chance to reflect critically on the way that event has shaped the subsequent course of our history. In the case of the Easter Rising, both the event itself and the values it later came to represent are important. Firstly, because the rising itself began a chain of events that led to the War of Independence and also because, in many ways, the Rising defined the very idea of Irish nationalism in the following decades, particularly though the founding years of the State. We have set out to examine the Rising from a number of different perspectives, but are essentially concerned with the role played by photography in defining the ideas we have about the Rising, considering how it was depicted, mythologized and even, finally, commercialised through photographic representation. We ask how that history has been defined by the way it was pictured and also, what lingering absences are discernible in these different accounts.

Among its other roles, photography is an important tool for shaping public perceptions and narratives. It does this through the wide dissemination of photographic media and also through its seemingly authoritative, ‘documentary’ nature. In the case of the Rising itself this is most obvious with press photographs, such as those found in the Cashman collection, showing the destruction to the city’s infrastructure and the impact on its inhabitants. At the time they were compared to the imagery that was being sent back from the battlefields of the First World War, indicating that a separate vocabulary for the representation of modern warfare was emerging at this time. Popular representation of the Rising was not limited to the press, however. It soon found a ready market in a variety of media, from postcards to specially produced commemorative booklets illustrated with photographs. We have traced the range and the style of these popular representations, with particular prominence given to the materiality of the objects, but also to their role in shaping our ideas about the Rising. In her essay Photography, Dublin and 1916, photographic historian Orla Fitzpatrick, describes in detail the culture of photography in Dublin during this period, revealing its technological and cultural underpinnings.

We have also considered the role played by photography in fuelling the idealism of the revolutionary generation. It is a significant paradox that both the malleability of photographs as well as their ‘documentary’ veracity has meant that the medium has played a leading role in propaganda, evident here in a selection of anti-slavery images, connected to the mercurial figure of Roger Casement, whose experiences investigating slavery in the Congo, which these images depict, and later in South America, fuelled his passionate engagement with the Irish revolutionary movement. Angus Mitchell, a leading authority on Casement, has contributed a searching account of what might be called the ‘iconography’ of the man and the part that photography had in the struggles that defined his life, as well as its role in shaping how that life is now understood. It remains an open question as to whether or not the idealism of Casement and his contemporaries could ever have been realized, but the significance of photography in its dissemination seems clear enough.

One of the unique aspects of photography is the degree to which it can function simultaneously in different contexts and the extent to which changing historical contexts can alter the reading of individual images. A good example of this is the album, usually called the Smith album, which collects pictures made by an otherwise anonymous amateur photographer in the immediate aftermath of the Rising. The collection offers an invaluable private reflection (intended perhaps for a small, intimate audience) on a very public event. By shifting the context in which this private album appears, moving from its maker’s possession, to an archive and finally to display in an exhibition examining the events depicted a century after they occurred these images are absorbed into the historical discourse that surrounds the Rising, but still attest to the extent that those now distant events were experienced by individuals such as this unknown photographer. Photography itself is shown to be a complex witness. Brenda Malone, archivist with the National Museum of Ireland, contributes a reflection of these extraordinary pictures.

Similarly, photography has played an instrumental part in defining how the earlier commemorations of the Rising were understood. This must be seen against the backdrop of shaping the very idea of the Irish state and the need to affirm a particular response; how the commemorations were ‘framed’ photographically asserts a claim over those events that speaks to how successive governments wanted to be seen at the time, by stressing the continuity between the ideals of 1916 and their own. Photography is a space of memory, of private memory, but it is also, inescapably, ideological. [Justin]

Our purpose has been to question how the ideas we have about the Rising were constructed and how they became ‘history’ through the agency of photographic representation. The aim is not to provide any definite conclusion about the events of 1916 or their consequences, but to examine the ways in which photography has fundamentally shaped our view of that history, incorporating the perspectives of private individuals as a counterpoint to official narratives. By suggesting as much a cultural as a specifically political revolution, we hope to create a more complete – and more inclusive – picture of these contested times, demonstrating the social context in which they occurred, while also underscoring the often fraught relationship that can exist between public and private histories. What emerges most clearly is the extent to which all of these narratives are conditioned by the circulation of photographic images in different, often highly mobile forms, but also by the use of photography as a tool to reflect personal experiences, its role in shaping memory. It is the tension between these accounts that we wish to emphasize here and the multiple roles that photographic representation plays in how history is understood.