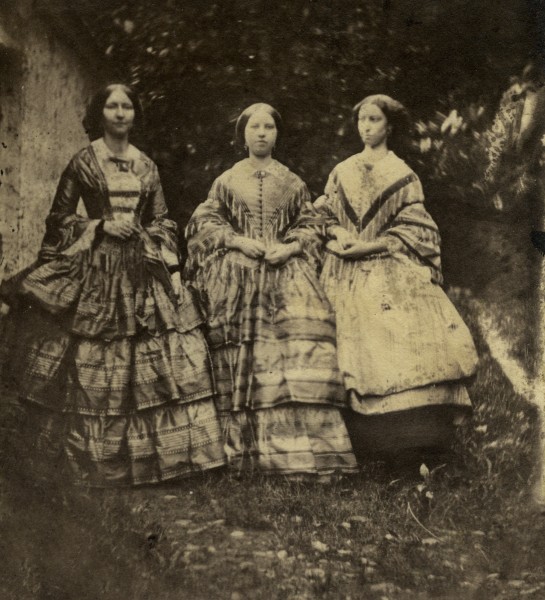 Early amateur photographers were primarily drawn from the Landed Gentry. They had the necessary time and resources to pursue the difficult processes of early photography, with many becoming proficient Calotype and wet-plate operators. By turning their cameras on everyday events, these amateur photographers left an invaluable record of life among the Anglo-Irish ascendancy.

Many of the most accomplished early photographers form the 1850’s and 1860’s came from ‘Big Houses’ around Ireland, notably: Lady Augusta and Hon. Luke Dillon of Clonbrock House, Galway; Edward King Tenison of Kilronan Castle, Roscommon; Mary, Countess of Rosse, Birr Castle, Offaly; Charles Ryder Madden, Hilton Park, Monaghan, and later, Jane Shackleton who worked in various locations around Ireland. The National Library/National Photographic Archive holds much of this valuable material in their extensive photographic collections, which contain over 6 million records, some of which can be viewed in their online digital collections.

It is noticeable that many of the finest early photographers in Ireland were women. Photography was considered a ‘suitable’ pastime for women, affording them a socially acceptable means of expression that would not have otherwise been accessible to them. Their use of the camera was generally restricted itself to the interior domestic life of their estates.

Several early photographers were active in recording Ireland’s architectural heritage. They also set out to document the customs that were felt to be disappearing among the local populations. While some of these pictures do betray a romanticised or stereotypical view of Irish peasant identity, they are also testament to a noteworthy understanding of just how important photography would be as a way to document a changing world. In the 1880’s and later there were a number of non-professional photographers of note. These include: Jane Shackleton in the west of Ireland and further afield in Europe; J.M. Synge in the Aran Islands; and Roger Casement’s important documentation of atrocities inflicted by the South American rubber industry on the Putumayo people. This work is still of considerable historical and aesthetic importance.

The practice of creating extensive photographic albums also begins at this time. Still largely the preserve of social elites, photography performed a dual function. It created a personal family record while at the same time reflected a privileged social position and affluence. The album presented domestic family photographs as a private record – framed as part of a larger narrative. This can be viewed as part of a wider Victorian fascination with classification and documentation. The enthusiasm for creating a fixed representation of family history would be the norm once photographic technologies became more widely available.