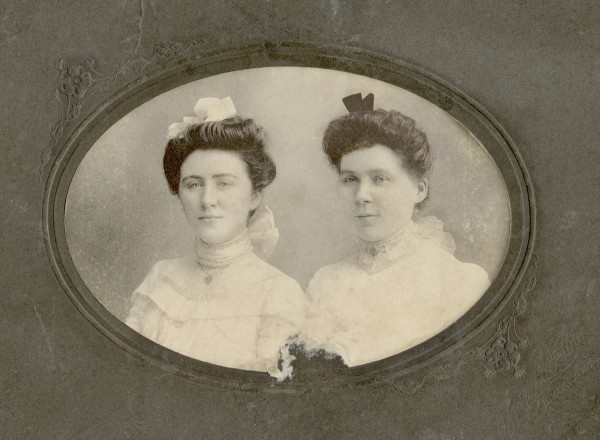 I collect photographs and write about them on my blog www.jacolette.com. Most of the people in these photographs are anonymous and will remain so. Sourced from online auctions, charity shops and even skips, the images have become separated from the families who once valued them. I look for interesting faces, extreme fashions and unusual formats or studios. I then research and write short pieces which I hope illuminate a moment in Irish social, photographic or fashion history.

Naturally, I know and understand my own family photographs in a different way to those that I write about on my blog or within an academic context. Their value comes from the telling and re-telling of stories that transform sometimes unremarkable images into something special. Would I buy these photographs if offered for auction on eBay? Probably not! But they do mean a great deal to me.

My love of photographs started with my grandmother, Roseanne, whose mother is shown in the above image. No visit was complete without a thorough examination of the box of photographs that she ceremoniously brought down from the ‘upper room’– an act that intensely annoyed my grandfather who declared that ‘no-one wants to look at that old rubbish.’ She ignored him and commenced her guided tour. She held each photograph, dictated the viewing order and seldom deviated from her script.

Mingled amongst the images of her daughters at dinner dances and snapshots of haymaking were the American photos sent across the Atlantic by a previous generation of emigrants. Different in format, they included tintypes and photo-booth pictures, neither of which were prevalent in Ireland. The American photos felt and looked different to Irish photographs.

One such example is this photograph of my great-grandmother Susan Smith and her cousin, taken not in her native Cavan, but in the Massachusetts city of Brockton. It is the only evidence of the ten years that she spent in America between 1895 and 1905. We hear little of Brockton now, but during the time that my great-grandmother lived there it claimed to offer the highest industrial wage in the world at $3.75 per day! At one stage ‘shoe city’ had over 100 factories and it was booming!

Put into an historical context my great-grandmother’s tale was typical of Irish emigration during the period. More single women than men left. Some stayed forever. Some like my grandmother emigrated for substantial periods of time, in her case ten years, during which she earned enough to provide herself with a dowry. This and her husband-to-be’s earnings as a copper miner in Arizona allowed them to buy a house and farm upon their return. My great-grandmother’s tale, mirrors that related by Diane Dunnigan in A South Roscommon Emigrant: Emigration and Return, 1890–1920, in which she tells how these independent women worked, saved and sometimes returned to Ireland bringing with them different life experiences.1

When my great-grandmother and her American cousin entered the studio of D.T. Burrell at 68 Main Street, Brockton, they commissioned an image that adhered to well-established conventions of studio portraiture. They wear their ‘Sunday best’ of fashionable lace high-necked blouses and choker necklaces. They have piled their hair into ‘Gibson Girl’ pompadours so prevalent during the period. Presented in cameo upon embossed paper, the two young women stare confidently at the camera. Her cousins, Mary, Kate and Rosalie were the American-born children of Cavan parents who had emigrated in the 1880s. Like them they worked in shoe factories, however, they had advanced from manual positions to jobs clerks and stenographers.

The anthropologist Daniel Miller’s survey of the possessions owned by the residents of a single South London street focused not upon their aesthetic qualities but instead he revealed that objects, such as photographs, often matter to people because of the relationships they signify. The meaning attached to the above photograph cannot be deduced by an analysis of its image content alone instead it is integral to a story known only within a family context. My grandmother’s relationship to her family photographs and in particular to this image reminds me of what Miller referred to as the ‘the sadness of lives and the comfort of things.’2

When my grandmother talked about this photograph she was not considering emigration trends or the role of the returned American. Instead, she used it as a vehicle to discuss a very personal event: the death of her father less than ten years after his return to Ireland. Although not included in the photo, he was the focus when this portrait was examined. The story of her parents’ hopeful return to Ireland starts with this image. His premature death from silicosis, the result of his work in copper mines, was naturally a major blow to his only child and this photograph allowed her to raise the subject sixty years or more years after the event.