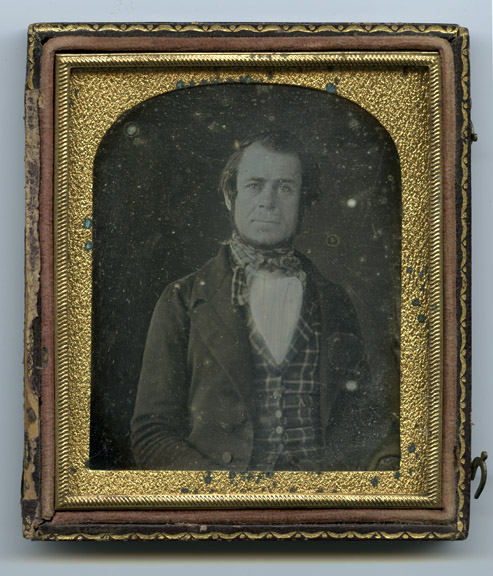 Daguerreotypes are one of the few forms of photography that are simultaneously recognised as both visual representations and as material things. The singularity, uniqueness and material density of the Daguerreotype draws attention to itself as a three dimensional object in ways that differentiate it from the appearance of being solely a vehicle for the transmission of the two dimensional representation of the world photo-mechanically transcribed onto a flat inert surface. Instead of penetrating the surface of the image to directly access what is contained within its frame, the physical dimensions and solidity of the Daguerreotype require the viewer to pause over its material form.

The moniker ‘mirror with a memory’, coined by the American writer Oliver Wendell Holmes to describe the Daguerreotype in the 19th Century, came about precisely because viewers frequently had to hold and tilt the reflective polished copper or silver surface of the Daguerreotype to see the image contained within. Depending on the angle of engagement between object and eye, the Daguerreotype sometimes appeared to be more about alchemy than chemistry. Sometimes visible and other times concealed by the reflective materiality of the metallic surface, the Daguerreotype required an active practice of looking and a physical manoeuvring by hand to control its vacillating appearance.

Perhaps because of this singularity and density as a material image-object, the Daguerreotype, like many other types of photography, cannot escape our desire to nominate it to a specific provenance and location. In museums and archives, categorizations of authorship, subject and geographic origins are mobilised to contain its meanings and present its material form as fixed to historical context. Photographs are frequently subjected to a process of institutional compliance that in its preservation of the authenticity and uniqueness of the photographic artefact confers upon it’s materiality a certain immobility. However, while Daguerreotypes may not be moving images, they are, like most forms of photography, images that move. This Daguerreotype taken by an anonymous photographer of an anonymous subject is an example of a photograph that has travelled between geographic locations and through different historical contexts. The Daguerreotype has crossed the Atlantic several times over, from America to Ireland and back again. Purchased from an eBay seller in 2013, it began its travels in the 1850s as an exchange between family members or possibly close friends before appearing in an auction in New York.

Passing through many hands along the way, its mobility is marked on the materiality of the Daguerreotype itself. The chipped flecks of the gilt edged frame, the worn edges of the leather bound cover, the broken clasp and missing half of the daguerreotype case are visible markers of the circulation of the Daguerreotype over the 150 years of its existence. The chemical spotting, tarnish and deterioration of the metallic image itself also gestures towards the potential fragility of the daguerreotype. Dirt has gathered under the glass cover of the slightly tinted Daguerreotype with the once vibrant brown hair and blue cravat of the sitter muted by the accumulated sediment of dust that has attached itself the surface of the image. History has thus imprinted itself on this Daguerreotype in the form of markings, indentations and the photo-chemical entropy of its metallic surface as it has travelled back and forth across the Atlantic.

In addition to the accumulated dust and physical markings that have deposited themselves on the image and its casing since the 1850s, the Daguerreotype has had a travelling companion that reveals how much of its history was bound to mobility. Tucked behind the Daguerreotype was a four page letter penned in America. Unsigned and undated the letter was written by an Irish emigrant to a fellow emigrant also residing in America. The letter mentions Kerry, and the names of people known to both the author and addressee of the letter. In one passage the author writes; “Two days since I have the pleasure of receiving your present. I have never seen so exquisite a Daguerreotype and judging of the fidelity of your wife’s portrait from that of your own I congratulate you most warmly upon having had the good fortune to coin the affection of me whose face is not only worth prizing for itself it is more to be appreciated as the reflex of a gentle benevolent disposition.”

Despite the stillness of the sitter, this anonymous Daguerreotype, seemingly devoid of authorship and geographic location, was produced with the intention of being a moving image. Received in a reciprocal act of exchange, the Daguerreotype and its trans-Atlantic history are a reminder of the ways in which as material objects photographs connect lives separated by geographic location. Even if the original connective routes are broken by the separation of the object from its owner, the materiality of the photograph has the potential to reconnect us to lost or hidden histories and generate new avenues for exploring our past.