An evening with the photograph album

An evening with the photograph album

Our photographs tell us what matters, what mattered, who we are and what we were. As photography in its early days moved beyond the professional studio portrait, as it expanded beyond the early amateur photographers (whose wealth enabled them to own cameras and record events) different layers of insight began to emerge. Yet even as photography became far more widely available with cameras like the Kodak Box Brownie, expense dictated that what could be photographed and distributed was still limited. Besides the cost of developing and printing, each roll of film was precious, forcing amateur photographers into far more editorial and curatorial decisions, deliberations and hesitations than they would face these days in the profligate image blizzard of Twitpic and Instagram.

In What Remains (2014), Pat Collins’s film based on the Irish Film Archive’s collections and images from decades ago, it is clear that people had yet to learn the grammar of intrusive new technologies, to become less wary and self-conscious under the gaze. Figures in these grainy moving images were still obeying the strict conventions of the family portrait/tableau – stiffly facing the camera, remaining static within the frame. Yet movement began to creep into the pictures in other ways. Many of the still photos collected here have a highly dynamic trajectory; a trajectory that begins at the point at which they were taken, then sent off to be developed and processed (in the absence of a home darkroom), awaited, collected, viewed, passed around, stored, mislaid, retrieved – triggering thoughts of lost or forgotten relatives whose lives are again brought into the light, generating stories, explanations, speculations.

Family albums can throw up twisted narratives of commission and omission, estrangements, loyalties, romance or loss. In these little histories the images are sometimes riven, untidy, creased, worn and torn, in collections congealed between cellophane sheeting, or becoming unstuck from their carefully-tended album pages, or languishing unsorted in shoeboxes or rusting biscuit tins. These archives, despite sometimes being ramshackle and fractured narratives of self and others, manage to tell social stories outside official history, shining a light on everyday work and leisure in past decades, from toil on the land to industrial and commercial enterprise, garments and fashions, women’s work and men’s place, and stories of emigration, wartime and changing social mores.

Photographs and photography preserve and connect. They can engage us even if we don’t know the subjects in them. They summon our attention and emotions. In this image-saturated and increasingly digital universe, there is still something startling about the tactile materiality of the family snapshot and those brightly-coloured envelopes full of promise and expectations – from Kodak’s yellow to the blue and grey of Ilford, strips of black-and-white negatives and tarnished colour slides. Sometimes it is not the central subjects in the frame that engage us. Often it is, as Walter Benjamin put it, the “unconscious optics”, the incidental elements that disarm us. A brother and sister are in their Sunday best at Dundalk train station amid familiar railway vernacular architecture; jutting across into the photograph is a sign for Refreshments – a long, generous word, from a far less frenetic time than today’s food-on-the-move, food-to-go culture, a time when words like “ices”, “confectioners” and “fruiterers” held promise and “victuallers” sold mutton (not just lamb). 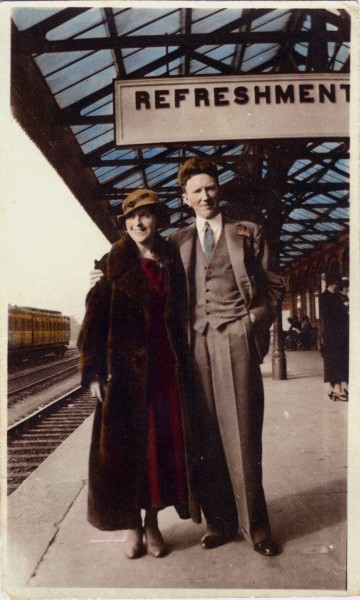 Another image gives a glimpse of small-town commerce in the shyly smiling proprietor outside Mac’s Boot and Shoe shop alongside his magnificent display of wellingtons. It’s from an age before the out-of-town shopping centres, online shopping and ongoing recessions put a wrecking ball to this traditional idea of the Main Street. In another photo, a child holds a packet of OMO soap powder, its bright, brash branding confidently simulating its difference from all other detergents. These are vivid glimpses into a world of Player’s Please, Raleigh bicycles, unsophisticated shamrock logos on Irish international airplanes – badges and brands which turn up in some of the collections telling stories of advertising, products and corporate address, some of which endure and others which have long disappeared in “time’s melt”. 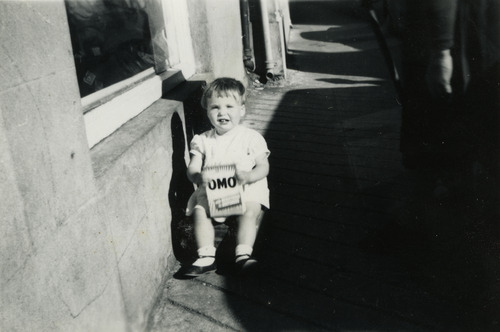 The photos draws us into other worlds and realms: to a photobooth with its curtains urgently drawn as the sitters – including their companions – hurriedly squeeze in and position themselves in time for the flash, followed by anticipation in the wait for the strip of four snaps to drop down into the chute, still not fully dry yet; or to the gentle humour and trickery in the Magritte-style portrait of an uncle, to those ancestral voices echoing across generations and continents from faraway tea plantations, to proud parents of new arrivals, to a traveller at an airport, or dispatches from Poland’s Silesian coalmines, or class group photographs awash with optimistic grins; or early images of a now famous landmark, Free Derry Corner; or a moment captured from Ireland’s big freeze of 1982. 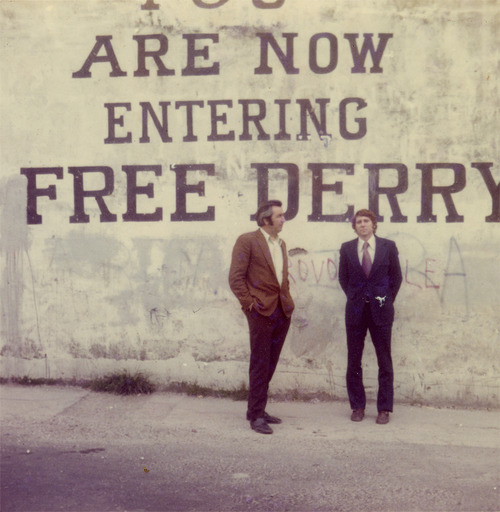 More sobering reflections are prompted by tidings from the First World War – the generic postcard made rich and unique with handwritten annotations. Peering through the different images, seeing early stiffness giving way to poise, on occasion adopting cinema’s glamour in honeymoon and wedding portraits, we can see how we learned to adapt to and eventually accept the camera’s gaze within a wider context and history of photography.

In 2013, London’s V&A Memory Palace exhibition, based on Hari Kunzru’s novella, presented a dystopian vision in which, after the ravages of a magnetic storm, all collecting and recording are banned, and acts of remembering become acts of resistance. Our photographs, although vulnerable to time’s assaults and buffeting by history, are still available to us to re-visit and re-create our own memory palaces. Curiously though, as has been widely noted, any photograph is always already over, past, gone the second the shutter opens and shuts; a moment is seized, yet the image is already slipping into time’s continuum. Perhaps it is this irony in its nebulous capacity as a repository of memories that drives much of our emotional charge and embrace of the medium – as we look searchingly into those fading, spectral images and invite benign hauntings.

Benjamin, Walter, A small history of photography in One-Way Street and Other Writings, (1979).