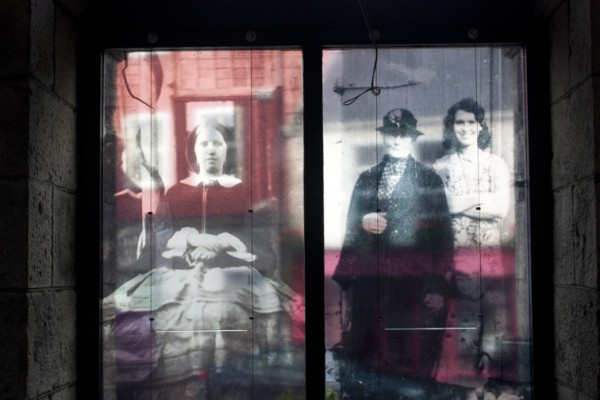 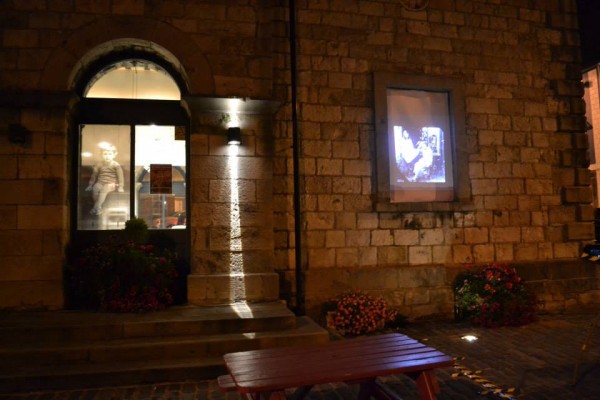 The Photo Album of Ireland Touring Project was shown at the Markethouse Arts Centre, Monaghan from 14 August until Sunday 26th October 2014. The specially curated outdoor projection on the facade of this beautiful building took place on Culture Night, Friday 19th of September 2014. The exhibition and outdoor projection afeatured a small selection of photographs from the family albums from the region generously contributed by the Clerkin, Conlon, Madden, McCourt and Shackleton families. The installation and exhibition was launched by Heather Humphreys T.D. Minister for Arts, Heritage and Gaeltacht on the 14th August 2104. 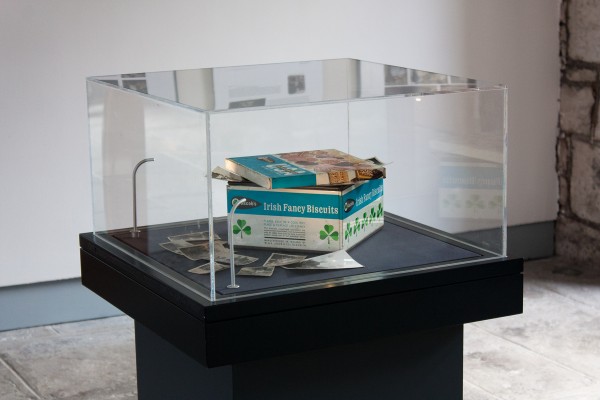 Background: The first Monaghan archive workshop, organised in partnership with Monaghan Heritage Services, took place on 16 May 2013 in the beautiful Market Theatre Gallery – kindly made available by Monaghan Arts Office. 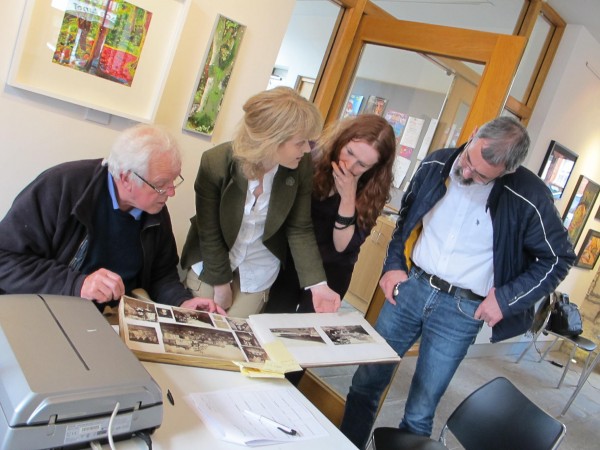 Introductory workshop with Sean Conlon and Johnny Madden in the Market Theatre, Monaghan

Heritage Officer Shirley Clerkin invited Sean Conlon, Eugene Clerkin and Johnny Madden to bring a selection of photographs from their individual private family photo collections to the introductory workshop. Researchers Trish Lambe and Maeve O’Neill outlined the Photo Album project and discussed the process of contributing digital scans to the archive. We set up our digital scanning equipment and scanned a small selection of Sean and Johnny’s photographs to give a clear idea of the process involved in contributing to the archive.

Sean and Johnny had fascinating but very different photo albums. Johnny’s photographs date back to the late 1850’s and focus mainly on different generations of his family who lived at Hilton Park, Scotshouse, County Monaghan. Sean’s photographs chart his family’s life in County Monaghan and their movement from Ireland to Philadelphia and back again across the generations from the 1880’s. Eugene Clerkin is a talented amateur photographer. In addition to his family archive pictures Eugene’s own photographic slide collection from the 1960’s is an important local resource. Follow up individual appointments were made with Eugene, Sean and Johnny for September and October 2013.

A brief insight into the process

Advice was given on storage and future care of photographs. Each image was returned to the album or collection owner immediately. High res. digital copies were given to each contributor. The specific details of each photograph was recorded on the archive submission form. This is a lengthy and time consuming process. Often with private (as oppose to historical or documentary) photographs there is often little known about the details of the photographs. The Photo Album retains a digital scan of the family/private photograph for use (by agreement) by the Photo Album of Ireland.

The Photo Album project gathers images by scanning digital images of private photo collections in the presence of each contributor.  Images are scanned at a high resolution of 800 -1200 dpi (dots per inch) using a high-end flat bed Epson scanner. Each photograph takes approximately 5 mins per scan depending on size.