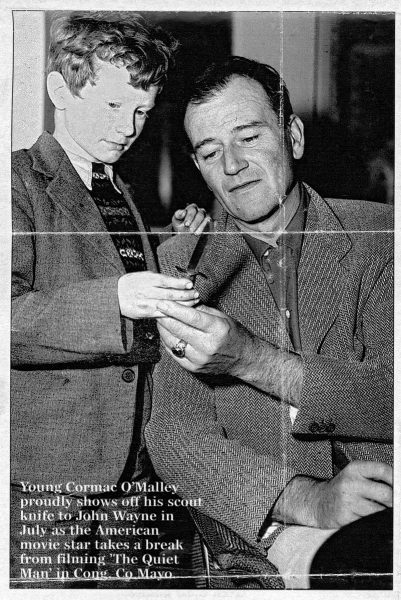 Cormac O’Malley was born in Ireland and lives on the seacoast in Stonington, Connecticut. The O’Malley family album gives a fascinating insight into the private lives of two high profile public figures: Ernie O’Malley and his wife Helen Hooker O’Malley.

American artist Helen Hooker O’Malley was born in 1905, the third of four daughters of a wealthy Connecticut businessman. Her sister Adelaide married the novelist John P. Marquand; another sister Blanchette married John D. Rockefeller 3rd. As a young girl, Helen initially attended the Wabanaki School in Greenwich, an open-air, alternative school, which instilled in her a love of Native American spiritual principles. She finished high school at Chapin School in New York and won the U.S. Junior Tennis Championship. Helen then trained as a sculptor. To supplement her art studies in New York, she made extensive trips to England, France, Spain, Italy and Russia as well as a long trip to Japan, Korea, China, and Mongolia.

Ernie O’Malley was born in Castlebar, County Mayo in 1897 and was the second of eleven children. Two of his brothers, Frank and Albert, joined the Dublin Fusiliers in the British Army at the outbreak of World War 1. Ernie was one of the leading figures in the Irish Republican Army (IRA) during the War of Independence and a senior commander of the Anti-Treaty IRA during the Irish Civil War. After the war, Ernie travelled in Europe before spending over seven years in California, New Mexico, Mexico, and New York, where he moved in artistic circles that included leading artists and writers. He went on to write three books on his warring years, 1916–1924, On Another Man’s Wound, The Singing Flame, and Raids and Rallies, all of which received critical acclaim.

Helen Hooker and Ernie O’Malley met in New York in 1933. Ernie introduced Helen to a particular vision of Ireland – one informed by his artistic, political and cultural interests. Following their marriage in 1935, Helen and Ernie set up home in Dublin, and later moved to live in Burrishoole, County Mayo with their three children Cahal, Etain and Cormac. Together they devoted themselves to the arts, Helen as a committed artist working in sculpture, photography and theatre, while Ernie made his living as a writer. He wrote large volumes of poetry and contributed to a literary and cultural magazine The Bell, where he was also Books Editor.

In 1936, On Another Man’s Wound was published to critical and commercial acclaim. Ernie and Helen grew apart,
and eventually Helen moved back to live in America with her two older children in 1950. Cormac remained with his father in Ireland. Director John Ford invited Ernie to work as an ‘IRA Consultant’ on the iconic film The Quiet Man, which was released in 1952, as well as another 1956 film. The O’Malley family album includes behind the scenes photographs of Cormac and Ernie with John Ford, Maureen O’Hara, John Wayne and cast and film crew. Ernie’s health deteriorated, and he died in 1957.

Cormac moved to life in America where he studied Law and married Moira Kennedy in 1971. Helen remarried Richard Roelofs, Jr. in 1956 and continued to work as an artist until her death in 1993, aged 88. Cormac is the keeper of his parents’ substantial archives, which include their papers, art works and extensive photographic archives. In recent years Cormac has dedicated his time to conserving and bringing to public attention the rich material held in his parents’ archives. Ernie O’Malley’s papers, one of the best primary historical sources for the revolutionary period in Ireland, 1919–23, are housed in the University College Dublin Archives and New York University Library.

Helen Hooker O’Malley gifted forty-five of her sculptures to the University of Limerick and a selection of her photographs to the National Library of Ireland, as well as a major art collection with 600 items to the Irish American Cultural Institute, now on loan to the University of Limerick. An exhibition and book featuring Helen Hooker O’Malley’s photographic work was launched jointly in the National Library of Ireland and the Gallery of Photography Ireland in 2019. Cormac lectures throughout the United States and Europe. He has been a Visiting Scholar at New York University’s Glucksman Ireland House and a Research Associate at Trinity College Dublin.