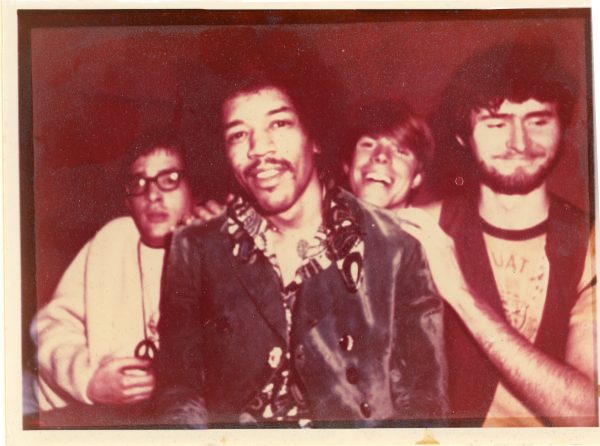 Chris and friends meet Jimi Hendrix - thanks to a rooster head, 1968

Chris Lamborne, Jimi Hendrix, Chris Murray, Chris Grey. Lamborne was leaving for Vietnam the next day. Chris Murray and Chris Grey used to rent a large papier-mâché rooster head and go to concerts. This is a snap from an original polaroid, March 10 1968, in Washington DC after a concert by the Jimi Hendrix Experience at the Washington Hilton Ballroom. (The full story of Jimi Hendrix and the rooster head, with variations in the comments section, is told in a Washington Post article: https://www.washingtonpost.com/local/jimi-hendrix-a-rooster-and-three-hippies-walk-into-the-washington-hilton-/2018/03/07/ca9b5f94-2212-11e8-badd-7c9f29a55815_story.html.)

Chris Murray’s family originated from Counties Cavan, Kerry, Galway and Cork. His paternal grandmother, Mary Maunsell was from Brandon Bay, County Kerry. Mary spoke only Irish when she emigrated to the United States around 1910. Her husband Matthew Murray was born in 1882 in Lower Lavey, County Cavan. One of five children, he emigrated to New York City at age 14. Matthew met Mary in New York and they married there. The family of his maternal grandfather Thomas Brown were originally from County Galway, but Thomas was born in the U.S.

His parents Rita Donovan Brown Murray and Matthew Murray and their six childen lived in Riverdale, a neighbourhood in the borough of the Bronx in New York City. Chris was an avid music fan growing up and can be seen here with Jimi Hendrix after a concert in 1968.

The Govinda Gallery was founded by Chris Murray in Georgetown, Washington D.C. in 1975. It focused mainly on images of or by musicians. Chris’ own album includes pictures of Chris with Andy Warhol, Donovan and Muhammad Ali. The Gallery closed in 2011, but continues its operations as an art consulting and publishing company. Chris and his partner Carlotta Hester are regular visitors to Ireland.