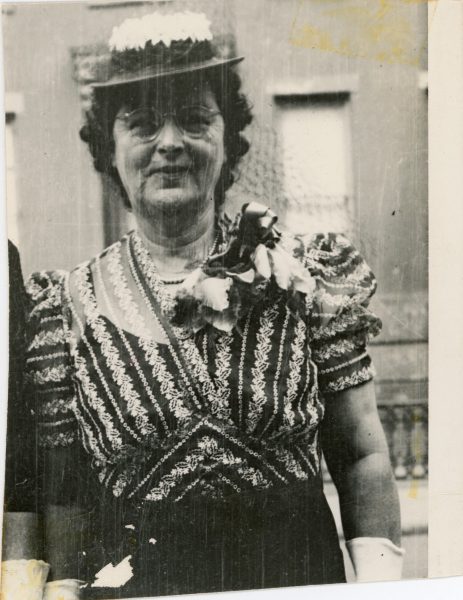 Mary Jane [Eames] Timoney, Brooklyn, at the wedding of Helen in 1946

Mary Jane [Eames] Timoney was the aunt who was the mother for Mildred after her mother Katie Eames Lynch died in 1919. She raised Mildred and her two sisters, as well as her own two daughters – five girls in all. She is shown here in Brooklyn, at the wedding of Helen (sister / cousin) in 1946.

With a strange kind of symmetry, both sides of Alice McDermott’s family feature aunts who become mothers to their sisters’ children.

Alice’s grandfather, Thomas McDermott, was born in Cashel, County Mayo in 1878. He came to New York City in 1902 and became a U.S. citizen in 1904. He met Elizabeth O’Toole who had also recently arrived from Ireland — from Mallow, County Cork, and they got married in New York City. They had five children, including Alice’s father William McDermott. But in 1912, when William was just 3 years old, Elizabeth died. Her sister, Margaret (O’Toole) McDermott then adopted the four surviving children, and became their father, Thomas’ second wife. Tragedy was to strike again, when only two years after Elizabeth’s death, Thomas himself passed away in 1914, leaving Margaret a young widow. She raised her sister’s four children on her own in Brooklyn and on the Upper West Side of Manhattan.

On Alice’s mother’s side, her grandmother Katie Eames was born in Gortemone, Dromahair, County Leitrim in 1883, raised in Bundoran and emigrated to New York around 1905. She married Patrick Lynch of Kenmare, County Kerry. They had three daughters. Alice’s mother, Mildred, was their youngest, born in 1918. Her mother died when Mildred was only three months old, so Mildred was raised by her aunt, Mary Jane (Eames) Timoney, alongside
Mary Jane’s own three daughters and her son, making a family of five growing up in Brooklyn. Patrick remarried and died in 1934.

Mildred and William, Alice’s parents, married in Brooklyn in 1948 and had three children: William, Kevin and Alice.