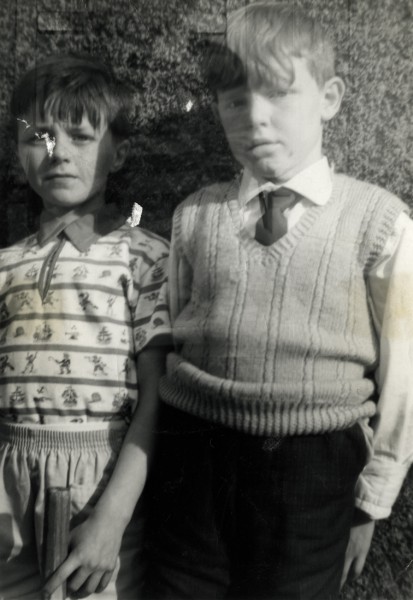 Michael Laverty and Gordon Ashbridge (aged 7) photographed in the street in Monarch Parade, Belfast in 1963. The boys both lived in the village area of south Belfast. Michael was a Catholic; Gordon was a Protestant. They were best friends up until the outbreak of the Troubles.

This archive of photographs documents a typical working class family in Belfast from the 1930 era onwards – contributed by Gordon Ashbridge, a photographic artist and lecturer.

The Shufflebottom, Campbell and Ashbridge Family

Charles Shufflebottom left the North of England to come and set up a business in Comber, County Down. The business was a newsagents and confectionary store. There he set up home with his wife Sarah and had 7 children. Annie Shufflebottom being the third of the children. When Sarah Shufflebottom died in 1937 Charles moved to Belfast and began work in the Belfast Shipyard.

Annie Shufflebottom met John Campbell (from Hopewell Street, Belfast) while cycling in Newcastle Co. Down. They subsequently married in 1935 and set up home in 7 Monarch Parade, Belfast and had 4 children. Sally (who died aged 6 months), Dolores, Elizabeth and John (Jnr). John and Annie began as Publicans on the Lower Shankill Road/Lower Falls Road area. Tragically John Campbell died after contracting Tuberculosis in July 1940. John Campbell Jnr was born 3 weeks after his father’s death. Annie endeavoured to continue the business but family pressures and staff dishonesty meant that she had to sell the business. After the war she met and subsequently married Walter Ashbridge (from Clementine Street, Belfast, a Stoker in Belfast Gas Works) in January, 1946. They went on to have four children Maureen, Walter, Noel and Gordon. Annie Ashbridge died 26th December 1971 of a stroke aged 55 and Walter Ashbridge died February 1980 of heart attack aged 65.