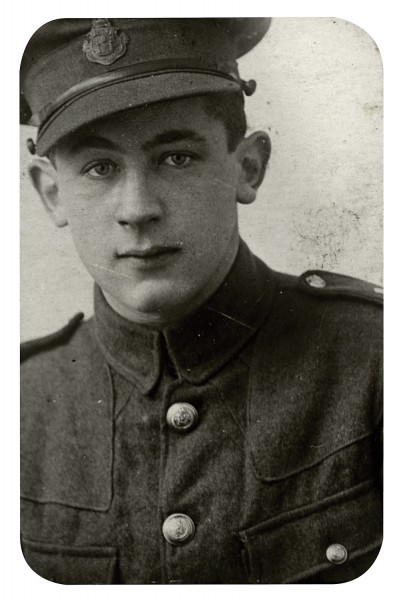 Portrait of George Walter Knight in uniform circa World War 1.

The Knight Family of Clones

Church & Estate records confirm that the Knight family have lived in the Clones area since 1678. An even earlier oral tradition in the family states that they acquired their first land from an officer in Cootes Cromwellian Army. The officer was so disappointed in the property he received for his services that he sold it to one of my ancestors. This was the small estate of Corcimmons (or Corcummins) outside Clones. The family appear to have obtained the land freehold which was most unusual and only applied to about 10% of land in County Monaghan at the time.

This small estate of between 100 and 150 acres mimicked larger properties in that it was entailed – passing from elder son to elder son. It was eventually taken over by the Land Commission in the 1950’s and divided among local farms. The original, rather modest but charming house still exists. There was also a mill on the property which would have greatly enhanced it’s value. It lay close to the Madden estate of Hilton Park and formed a type of buffer zone between it and the neighbouring Barrett Lennard Estate which included the market town of Clones. Not being tenants and beholden to no one gave a number of my ancestors an independent streak and a sense of obligation to their community which was not always in evident in other families. They had a certain amount of financial independence which seems to have been put to good use. Each generation produced people who either entered the law, medicine or the Church. There was no great military tradition within the family until a number played their part in the Great War of 1914-1918. The family were staunchly Unionist and Church of Ireland throughout the 19th century. This was tempered by an understanding of Irish Nationalism and a regard for friends and neighbours who were of a different political or religious persuasion. There are at least two incidents recorded where a helping hand was extended to those who had got into serious trouble with the authorities at the time. These gestures of friendship were not forgotten when conditions were reversed and the Irish Majority claimed their right to self government.

My great grandfather George Alexander Knight was born in 1838. Aged 28 he married – by special licence – Nancy Elliott, who was only 16 years of age. They had eleven children of whom my grandfather Michael Elliott Knight (born in 1869) was their third child and second son. George Alexander duly inherited Corcimmons from his elder brother James. On the death of George Alexander in 1925 Michael’s elder brother Luke succeeded to the property. He was the last of the Knight’s to live there. In his youth Michael rode to hounds and seems to have been involved in an endless round of social activities. He married his first cousin Mary C. Young at St. Anne’s Church Dublin on Wednesday 3rd August 1898. Unusually at the time they honeymooned on the continent. On their return they took up residence in the family home on the Diamond, Clones (currently occupied by his grandson – the writer of this text). On qualifying as a solicitor, Michael almost immediately took over his father’s practice. George Alexander had opted to leave Clones to take up an appointment as Clerk of the Crown & Peace for County Meath. He handed over his legal practice to his newly qualified son and let him get on with it. For the first few years of married life Mary, my grandmother, kept a book of newspaper cuttings which record many of the instances of their daily life. One of the first newspaper reports collected by my grandmother records their welcome home to Clones after their honeymoon, when a reception was organised by Clones Fire Brigade (of which Michael was a Captain). Michael was immersed in local politics, standing as a Unionist candidate for the local government elections. He stood as a Unionist candidate in three separate General Elections being defeated by the Sinn Féin candidate Ernest Blythe on his final attempt in 1918. He was a leading Orangeman and Freemason and was devoted to the care and maintenance of his Church, always holding a senior position in the Select Vestry. For decades he was Diocesan Registrar looking after all the legal business of the Church of Ireland Diocese of Clogher (on a voluntary basis). In addition to all these responsibilities he ran an extensive legal practice from his offices attached to his house in the Diamond, Clones, County Monaghan. After the First World War his eldest son George returned from the front and helped M.E. with his legal practice.

My grandfather seems to have been a remarkable man of boundless energy. I was born in 1945 and can remember him as a slight figure in his eighties.  Even then he was still practising as lawyer. He had been a founder member and was still a governor of the local Church of Ireland secondary school.  He was a founder member of Clones Golf Club and was still acting secretary in his eighties. He helped found Clones Soccer Club and, as a young man, play in one of the first association football club competitions in Ireland. Of course none of this would have been possible were he not surrounded by a loving helpful family and dedicated staff. His son George never married and even I can remember his devastation on the death of his father in 1960.Michael had three other surviving sons: James Andrew (b. 1900) served in World War 1 as a midshipman, later becoming marine architect with his own business in Belfast.
William Alexander (b. 1903) became a doctor. He joined R.A.M.C and retired with the rank of Lieut. Colonel. He was awarded a C.B.E.
Brian Elliott Knight (b. 1906) was my father. He farmed at Coolnacarte Lodge outside Scotshouse, Monaghan. He married Louise Carruthers in 1942. They had three sons William, Patrick and myself – George.

The photographs in my family collection feature members of my family from the early 1900’s up to the outbreak of the Second World War. They show a group of people at peace with themselves, very much at ease in their own company. One has to admit that compared to the harsh reality of life for many people during the first fifty years of the 20th century these photographs give a look into a privileged society. There are annual holidays, usually taken in Donegal, tennis parties, evidence of the availability of motor cars, a little hunting & fishing – all entertainments which would have been alien to many working class people, where life would have been an endless round of work and struggle.