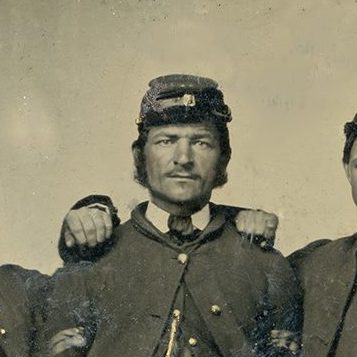 The earliest image collected here is a tintype photograph of Michael E. Flynn, great-grandfather of our contributor Joe Flynn, with fellow Union Army soldiers taken during the American Civil War. Soldiers often sent studio portraits like this one home to their families as mementos.

Michael was born in 1847 to Edward and Ann Flynn who had recently emigrated from Ireland. Like many of those from an Irish immigrant background he enlisted in the Union Army, joining the 99th Infantry in October 1861. He spent three years as a private in Company G and was discharged on October 26th, 1864 at New Bern, North Carolina.

Emigration from Ireland was particularly high in the years after the famine. Most of those who arrived gravitated to urban centres in the northern States. Irish immigrants and Irish-Americans served on both sides in the Civil War, with an estimated 150,000 fighting for the Union cause, often forming their own regiments.

After the war, Michael married Mary E. Manning of Somerville, Massachusetts in 1870. He was later employed as a mason and served on the Common Council of the City of Somerville in 1892. He died in Somerville in 1896, aged 49. Michael and Mary had four children, Edward J., Catherine, Helena and Joseph — Joe’s grandfather.