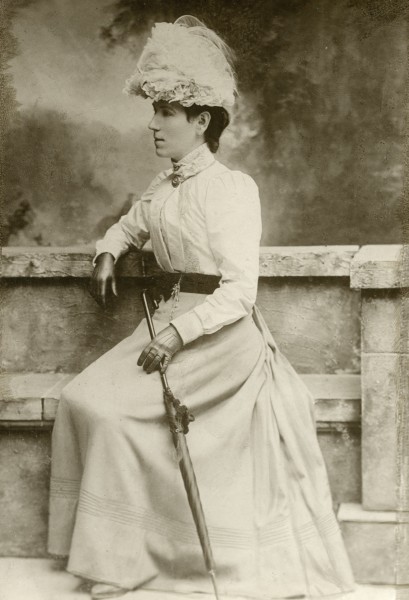 This collection includes photographs of Patrick and Annie Fleming who lived in Béal na Blath in County Cork, as well as members  of the Brennan and Buckeridge families.

Fleming family: Patrick J. Fleming was born in Tureencahill, near Rathmore, County Kerry. He was born in c. 1868. His family had been evicted from the farm in Tureencahill during the Land Wars in the 1880s. Patrick went on to be a primary school teacher and worked as headmaster at the time Michael Collins was killed in Béal na Blath in 1922. Patrick met Eamon De Valera in a local pub a few days before Micheal Collins was shot in Béal na Blath and the assassin disappeared across the family’s back garden following the attack.

Grandmother Annie Crowley was from Castletown, Kinneigh near Enniskeane, County Cork. She was born in 1882 and worked in Limerick before her marriage. Her mother took over the running of the farm until her daughter married.  Annie was a primary school teacher and was a strong, principled, kind, quiet woman.

Buckeridge family: Walter Douglas Nugent (went by Douglas) born in Shepherdsbush Road, London. He came to Ireland when he was eight years old and was a World War One veteran with the Argylle & Southerland Highlanders – rising to the rank of Captain in 1916 when he was assigned to Royal Dublin Fusilliers. He was brought back to Dublin for training to become an officer during Easter of 1916. He then served in East Africa until 1919 when he was demobbed. After the war he became a bank manager and his last position was in Castletownbere. His wife Kathleen Agnes Brennan was from Watergate, Kilkenny City. They had to get married in during the War of Indepenence in England as their marriage was frowned upon locally. There was speculation as to whether he converted to Catholicism.