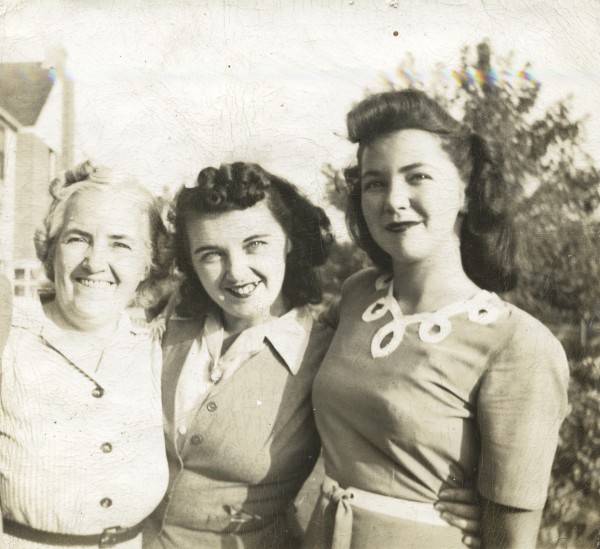 The Conlon family photo album collection features photographs charting a continuous cycle of emigration from the 1870s up to the 1980s. Successive generations of the wider Conlon family have emigrated from Ireland — moving to live in Philadelphia, setting up home in the suburb of Germantown, Five Points, and in later years, Delaware County.

Patrick Joseph Mullan, born in Tynan, County Armagh, January 1852, emigrated to Philadelphia in the 1870s. He married Sarah McCullough, (born Draperstown, County Derry) and together they had 7 children — James, Rose, Joseph, Elizabeth (Lizzie), Mary, Owen and Owen’s twin who died at birth. A family studio portrait taken in 1895 depicts Lizzie Mullan (later Conlon) as an infant. In the months following, the Mullan family returned to Armagh to the family farm at Turry, near Tynan, where some years later they bought land from the Caledon Estate. Following the death of his wife Sarah in 1899, Patrick married Catherine McKeown. James, Joseph and Rose all returned as young adults to the United States, while the remaining siblings stayed at home. Liz visited her sister, brothers and their families in 1962.

Liz’s son John Conlon left Armagh in the late 1940s and went on to serve in the U.S. Army during the Korean War. He married Mary Gilmartin from Bonniconlon, County Mayo. In the 1950s they set up home in Copley Road, Upper Darby, outside Philadelphia. Liz’s younger son Vincent and wife Marina lived for a time in Kilburn, London, where their eldest son Seán was born, before emigrating to the United States. They eventually set up home in Germantown, Philadelphia in 1961 where Vincent worked as a carpenter, then moved to Five Points in the north-east of the city. They raised their children Seán, Kevin, Briege, Deirdre and Vincent. A member of Clan na Gael and political activist for Irish independence, Vincent was part of the official welcoming party of Gerry Adams’ historic visit to the United States in 1994. Seán has been similarly politically active in American /Irish organisations supporting Irish reunification. The Conlon family came back to live in Monaghan in 1972. As a carpenter Seán returned to the United States in 1980 with his wife Eileen, where they spent 14 years living in Upper Darby before returning to live in Monaghan, where he has been a Sinn Féin Councillor since 1999.