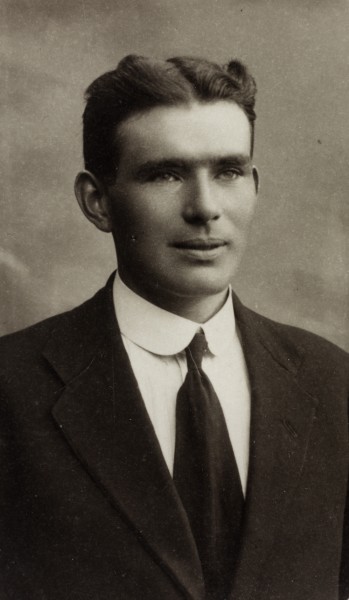 Cornelius (Con) O’Donovan, a native of Casheliskey, Co. Cork (near Clonakilty), took part in the 1916 Rising, during which he was stationed at the Four Courts. He was sentenced to death (commuted), imprisoned in Dartmoor, and released in 1917 as part of the general amnesty. He was greeted by thousands on his arrival back in West Cork – “…the occasion for one of the most remarkable demonstrations of public rejoicing witnessed in Clonakilty in recent years” (see sources here). He was back in prison (Usk, in Wales), in 1918, released in 1919 due to ill health caused by flu, arrested again in 1920 following his return from the funeral in Cork of Terence MacSwiney.

Soon after being freed in late 1921 he married Agnes Monks; the best man at their wedding, Harry Boland, was killed shortly afterwards in the Civil War. Con completed his studies in agriculture and went on to work at the Department of Agriculture. It is unclear whether he took part in the Civil War.