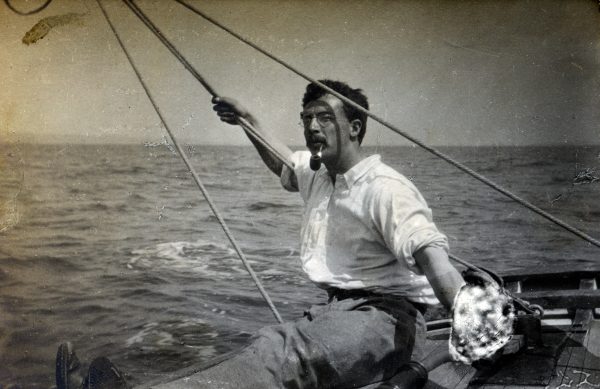 Erskine Childers smoking a pipe on board the yacht Vixen, 1898

Erskine Childers smoking a pipe on board the yacht Vixen. Solent, UK, 1898.

In the autumn of 1903, by sheer chance Erskine Childers (1870–1922) was seated next to Mary “Molly“ Osgood (1875–1964) at a dinner party in Boston. Love at first sight, an immediate engagement ring offered, the two were married three months later. Molly was raised in Boston and Erskine in London, the former with a disability from childhood that never allowed her to walk unaided, and the latter, orphaned from the age of six. Both revelled and bonded over their childhood adversities. Erskine by that time was a bestselling author of a genre defining novel, The Riddle Of The Sands (1903). The book, never out of print, has been listed as one of the top espionage thrillers of all time.

Alongside the tell-tale signs of the coming world war in Europe, their two children were growing up, Erskine H. (eventually to become President Childers) and his younger brother Robert. Molly and Erskine were lifelong devoted home rulers, however Erskine shifted from Unionism in his youth to Irish Republicanism by his late thirties. The Asgard yacht, their wedding gift, was used in the Howth gun-running of 1914 to bring in 1500 Mauser rifles to support the efforts of the Irish Volunteers at the outbreak of war.

Whilst in the RAF he was a flight observer, and became an expert in aerial photography. Using some of the first 5 x 4 cameras he was known to risk life and limb in the air standing up in the cockpit; at times placing a foot on the wing to capture the right angle on the ground below. By the time of the armistice, Erskine was a substantial English war veteran with over six years of total service in both the Boer and the First World War.

With successive Home Rule bills defeated in England, Erskine, Molly and sons moved permanently from their home in London to Dublin. Erskine had always considered himself Irish, more than Anglo-Irish in reality. At the same time, Erskine walked into Sinn Féin offices in Dublin and volunteered. He was quickly introduced by his cousin Robert Barton to Michael Collins, Arthur Griffith and Éamon de Valera. Within days he was working in Sinn Féin’s publicity department. In 1921, after taking part in the drafting of the Anglo-Irish treaty negotiations as a secretary for the Irish delegation, he chose to side against its ratification, firmly aligning himself with de Valera and his Anti-Treaty compatriots.

The tragic Civil War that soon followed sealed Erskine’s fate. In late 1922, a marked man after months on the run in West Cork, he was captured, ironically enough, at his mother’s house in Wicklow. Tried by a military court run by the Free State government, he was sentenced to death by firing squad, for holding a pistol given to him by Michael Collins. Only 17, his son Erskine H., was last to say goodbye to him hours before his death. Molly in her devastation, as a widow and in the years following the Civil War, chose not to stoke fires that might further fuel the misunderstandings that trailed her husband’s legacy. She died in 1964, in the same house that her husband was captured in. Molly and Erskine now rest together in the Republican Plot at Glasnevin.

President Childers spent most of his adult years as a politician, under the mentorship of Éamon de Valera. His brother Robert became a successful newspaper man. As President, Erskine devoted his energy towards peace and reconciliation, considering it his life’s work. Letters that exist from the 1920s, document his desire, even as a teenager, to work towards becoming President. A boyhood dream; a life of public service in tribute to his fallen father.