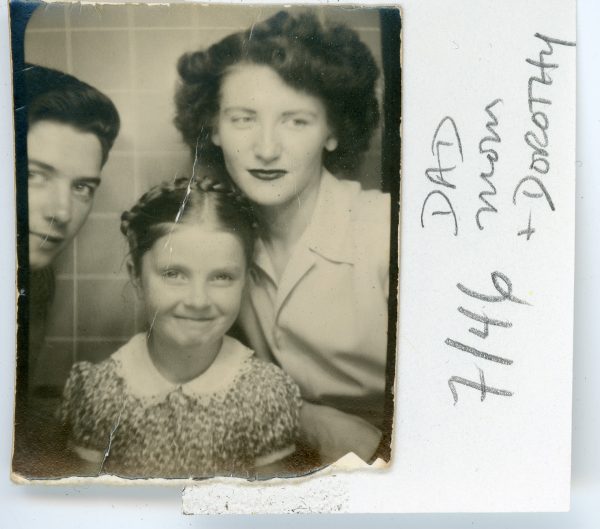 Beth’s Father Patrick with sister Dorothy (Dot) and Beth’s Mother Eileen (Hendron) McNally, Quincy, MA, USA, July 1946. Another Aunt Beth recently reconnected with after not seeing her for over 40 years. She lives in the next city over from Beth and is now 80 years old.

This selection focuses on Beth’s paternal grandparents, Mary Rose (McAtasney) McNally and Patrick McNally. They had emigrated from Lurgan to Boston, Massachusetts,
in 1927, and had 8 children. Their photographs include a moving visual record of their last, ill-fated trip to Ireland in 1954. The trip was an anniversary celebration: they sailed on board the T.S.S Olympia and arrived in Cobh, County Cork. They visited family and friends in Lurgan and Belfast. But Mary Rose was involved in a road accident in July 1954 and tragically, she died. One month later, Patrick died from a heart attack, although some say a broken heart. Beth’s father and uncle travelled to Ireland to make the funeral arrangements for both parents.

Beth’s maternal grandparents, Daniel Hendron and Elizabeth (Kearns) Hendron emigrated from Lurgan to Tuckahoe, New York in 1925 and 1926, and had 4 children. Elizabeth was actually born in Connecticut, but her mother died in childbirth, so she was brought back to Ireland to be raised by her father’s sisters. She returned for many visits, but Dan only came back once in 1963 when they visited family, including his sister Kate McConville in 1963 in the County Armagh townlands known as the Montiaghs.

Beth visited Ireland for the first time in 1984 with her mother, who was returning for the first time since she was a baby, along with with her sisters. Since then Beth has visited many times, especially with the McConville family, meeting more relatives from both sides of her family with each visit to add to the family tree.