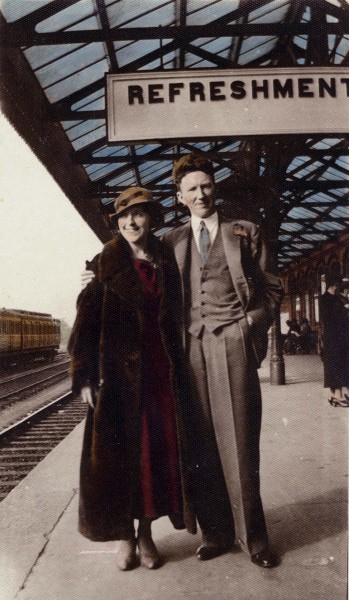 Family album of Frances (Fanny) McCourt (née Rowe) and her husband Tommy McCourt from Culhane Street, Dundalk, County Louth. Tommy was a furniture dealer and upholsterer who had a workshop in Yorke Street, Dundalk. Fanny was a homemaker who worked as a domestic servant and in a hosiery factory prior to her marriage.

Frances was the daughter of Mary Ladrigan and Albert Rowe. Mary was a servant from a republican family in Cahir, Tipperary. Albert (Bertie) Rowe was a British soldier from Ramsgate in Kent serving with the Royal Field Artillery in the British Army. He met Mary while stationed in Cahir, Tipperary.  In 1899 Mary and Albert married and later moved to live first at the Curragh Camp and later to the British Army Barracks in Dundalk where they lived in Barton Cottages, Barrack Street, Dundalk.

First World War
At the outbreak of the Great War in August 1914 Battery Sergeant Albert Rowe left Dundalk with his Battery, the 122nd Howitzer Battery of the Royal Field Artillery. The Battery joined the other bridgades of the British Expeditionary Force who boarded ships in Belfast harbour for Flanders. Albert saw immediate action and was awarded a ‘Mons Medal’ for his service during the Battle of Le Cateaux, near Mons. This was one of the first engagements at the start of the war. He fought at subsequent battles – Ypres, The Somme and Vimy Ridge.

The Battle of Arras was a key battle during the First World War. Following the Battle of the Somme in 1916 changes were made to battle tactics most significantly the use of creeping barrage and the use of large extensive tunnel networks. The Battle was fought at the end of the harshest winter on the front. The daily attrition rate was one of the highest in the whole war. Artillery played a key role in this battle. On 15 March Albert Rowe’s 122 RFA Battery joined the 52nd Brigade attached to the 2nd Canadian Division. Shortly after the Battle of Vimy Ridge during what was known as ‘bloody April’  on 22 April 1917, Albert was injured by shrapnel. He was evacuated to Canadian Field Hospital and from there was sent to Wharnfield Hospital in Sheffield.

He later returned to recuperate in Dublin Castle in 1917. He also contracted Trench Nephritis from ‘lying about on wet ground‘. Due to his failing health, he retired from the Army and took up work on the Great Northern Railway in Dundalk as part of the “Breakdown Gang”. He died in his 40s from TB in 1925. His wife was denied a Widow’s pension. His wife Mary died of a heart attack in her 40s leaving 4 children. Relatives in Ramsgate and Tipperary were unable to take in the children. As a result, the four Rowe children were dispersed between various institutions and organisations: Frances went into domestic service, Jackie joined the Merchant Navy, Mollie was sent to The Royal Drummond Orphanage in Bray and Bertie was sent to St. Brigid’s Asylum in Ardee, County Louth. Many of their children had few physical mementoes of their family life apart from some war medals and a small number of valued photographs.

Other photographs in the album belong to the McCourt Family and feature: Tommy’s sisters Cissie & Minnie who died in their 20s from T.B. and Dropsy: sister Kathleen and husband John Plunkett – an IRA volunteer active in the North Louth- South Armagh I.R.A. Battalion during the War of Independence from 1919-1922 who took the Anti- treaty side in the Irish Civil War in 1922 and mother Mary  (née McKeown) a devout De Valera follower and local unofficial midwife.