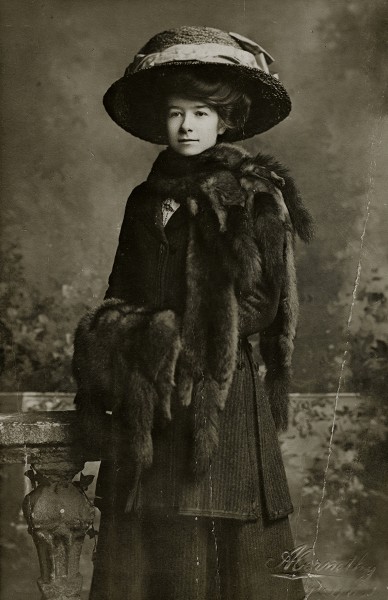 Formal portrait from the Johnston collection

Photographs contributed from the collection of Don Johnston.

This collection dates back to the wedding of Don’s grandparents, Patrick Johnston and Margaret Christina McKenna, in 1884, and includes a range of Carte de Visite photographs, which don’t often appear in private photography collections within Ireland.

The Johnston family lived on Crow Street in Dundalk, County Louth, and were a middle-class family of factory owners and financial professionals, which accounts for the amount, the quality, and the range of photographs in this collection. Until the emergence of the Kodak Box Brownie  – “You press the button, we do the rest” – photography was an expensive pursuit and beyond the means of the majority. (Although the earliest Brownie was released in 1900, the rise in the use of cameras in Ireland was a gradual one.) With the development of a cash economy in Ireland, home darkrooms, family photo albums, and visits to photography studios became a feature of middle class life.

The period between the late nineteenth and early twentieth centuries saw an increase in photographs of children, particularly within the emerging middle and upper classes; children had formerly been the subject of photographs mainly within larger family group shots. As photography became more affordable and attitudes towards children began to change, a new kind of portrait – the newborn, toddler, or young adult, often posing semi-formally in studio – can be seen.  This is the beginning of the family album as we recognise it now.

Don Johnston, album contributor, has himself worked as a professional photographer and taught for many years at Bush Post Primary School in Dundalk. He has a keen interest in local history and currently serves as the Vice-President of the County Louth Archeological and Historical Society.