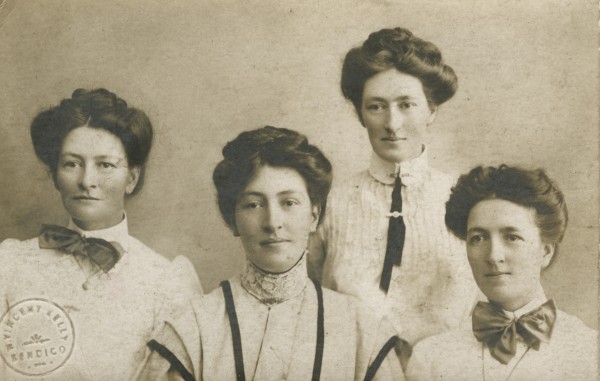 Eileen, Beth, DInah and May Bailey, relations of the Ralston family. All the women in the photograph emigrated to Canada and America.

Photographs contributed by Hilary Roulston, Gortree, Newtowncunningham, Co. Donegal. Depicted are members of Roulston, McDowell, Cole, McClean and Osborne families. These families would all have been in Donegal since the 17th and 18th Centuries. They were farmers and from the Presbyterian community. This collection includes photographs from the 1880s onwards which feature family life on the Roulston farm at Gortree, photographs of the Ulster Volunteer Force drilling exercises (organised in 1913 to resist moves towards Home Rule on the island of Ireland). The collection also includes formal studio and informal World War 1 photographs of soldiers including a number of family members . Robert Roulston, the contributor’s Grandfather, was a Sergeant in the 11th Royal Inniskilling Fusiliers in the First World War, hence the military photographs. Two Australian family members were killed in the War. Many members of the families emigrated to Australia, Canada, USA and New Zealand, from the early 1700s.