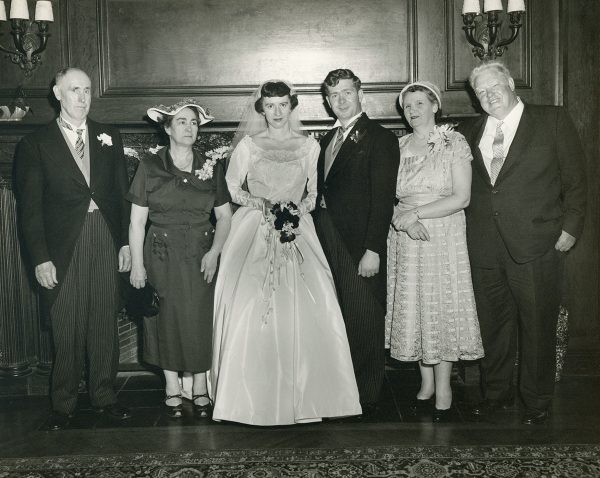 Wedding of Margaret Cassidy and Thomas Geraghty, with their parents

Wedding of Margaret Cassidy and Thomas Geraghty, with their parents

The Geraghty album traces the family from County Galway to the Boston area.

Ann’s maternal grandfather, Michael Thomas Cassidy, was born in Boston in 1875, but spent a good part of his childhood in Galway. He returned to Ireland with his mother after his father was killed in an accident. In his late teens Michael went back to Boston, and joined the United States Navy. He took part in both the Spanish-American War
and World War 1. In the latter, despite being 6’4” he served onboard a submarine off the coast of China. In World War 2, Michael was summoned out of retirement to assist in the administration of the Charlestown Navy Yard, where
he helped to prepare young recruits — the so-called ‘30- Day Wonders’. He called them the ‘30-Day Blunders’.

Anne Carr, Ann’s maternal grandmother, was born in County Galway. Her mother had spent ten years in Boston, returning to Galway when her parents were ill. The cycle of emigration took up again in the 1910s when Anne left Ireland with her two sisters to join an aunt in Boston where she ‘worked out’ as a cook. Anne then returned to Ireland to tell her mother she was engaged to a Norwegian Protestant. On the boat back to Boston, she met Michael Thomas Cassidy and they fell in love. Knowing her Norwegian suitor would be quayside on arrival in New York, she exited from the other side! Anne and Michael were married in 1925. Their only child, Margaret, Ann’s mother, was born in 1927.

Ann’s father, Thomas Joseph Geraghty, was born to a farming family in Ballinasloe, County Galway, the eldest of eight. When he was 21, he emigrated to Boston, arriving on July 4th 1948. His uncle who had been working for the City of Boston for some decades had invited Thomas to the U.S. and got him a job digging ditches. Thomas later enrolled in the Wentworth Institute of Technology, started as a bricklayer and then got into general construction. His brother, Peter, 8 years his junior, who himself had emigrated to England, relocated to Boston and worked with his brother in the construction business. The Geraghty photo album collection includes a series of photographs from the wedding of Ann’s parents, Margaret Cassidy and Thomas Joseph Geraghty in Boston. Our selection here concludes with a glamorous photograph of the newly-weds behind the wheel of their car after the reception, a visible manifestation of the American Dream.