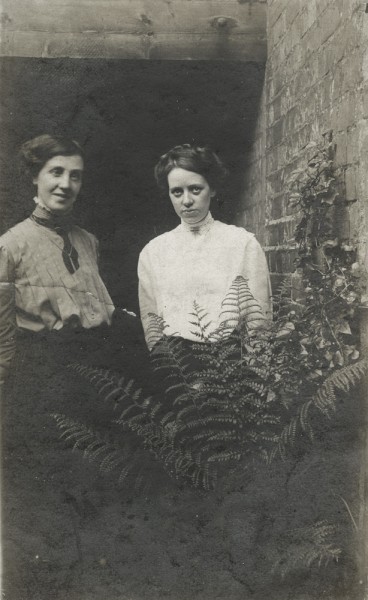 Winifred Carney, was born into a lower-middle class mixed marriage family in Bangor, County Down, Her father was a Protestant, her mother a Catholic. When she was a child her father left the family, leaving her mother to support them. Winifred, her mother and her five siblings moved to Falls Road in Belfast, where her mother ran a small sweet shop. Carney was educated at the Christian Brothers School in Donegall Street in the city, later teaching at the school. She enrolled at Hughes Commercial Academy around 1910, where she qualified as a secretary and shorthand typist, one of the first women in Belfast to do so.

From the start of her working life Winifred was interested in more than just secretarial work. By 1912 Carney was in charge of the women’s section of the Irish Textile Workers’ Union in Belfast, which she founded with Delia Larkin in 1912. She worked as a clerk and became involved in the Gaelic League in the Suffragist movement and in socialist activities. She met James Connolly in 1912 and consequently became the secretary for the Textile Workers’ Union. According to her German biographer Helga Woggon, Carney was the person best acquainted with Connolly’s politics.

In 1913 she was heavily involved in the fundraising for the locked-out Dublin laborers. As a result of her deep involvement with the trade union, she met and eventually became Connolly’s typist, typing his articles for publication. Carney became Connolly’s close friend and confidant as they worked together to improve the conditions for female labourers in Belfast, and joined the fight for women’s rights and suffrage. According to her biographer, Helga Woggon, she had become the person most closely acquainted with Connolly’s beliefs, ideals, and plans.

Carney joined Cumann na mBan, the women’s auxiliary of the Irish Volunteers, and attended its first meeting in 1914. While she was in Cumann na mBan, she taught first aid and developed a proficiency for handling a rifle.

When the Great War commenced in 1914, Carney concurred with Connolly that it was the perfect time to stage a rebellion, even if it was only of a symbolic value. On the 14th of April 1916, she was summoned by Connolly to join him in the insurgents in the General Post Office where they were garrisoned. Initially, Carney was the only woman at the headquarters of the G.P.O. Carney t during the occupation of the building, which she entered armed with a typewriter and a Webley revolver. While not a combatant, she was given the rank of Adjutant and was among the final group (including Connolly and Patrick Pearse) to leave the G.P.O. After Connolly was seriously wounded, she refused to leave his side. This was despite direct orders from Pearse and Connolly. She took the wounded Connolly’s final dictated orders. Carney, alongside Elizabeth O’Farell and Julia Gremen left the GPO with the rest of the rebels after their surrender.

After her capture, she was held in Kilmainham Gaol and was then moved to Mountjoy Prison. Carney, alongside Helena Molony, Maria Prolz, Brigid Foley and Ellen O’Ryan and others were moved to an English prison. 69 other women were released from prison one week after the execution of the Rising’s leaders. By August 1916 Carney was imprisoned in Aylesbury prison alongside Nell Ryan and Helena Molony. The three requested that their internee status, and the privileges it brought, be revoked so that they would be held as normal prisoners with Countess Markievicz. Their request was denied, however Carney and Molony were released two days before Christmas 1916.

In the 1917 Belfast Cumann na mBan convention, she was the delegate. She stood for Parliament as a Sinn Féin candidate for Belfast Victoria in the 1918 General Election. She polled 4.05% of the vote, gaining less than four hundred votes. Carney lost to the Labour Unionists. Having lost, she decided instead to continue her work at the Irish Transport and General Workers’ Union until 1928.

After the signing of the Anglo-Irish Treaty and the formation of the Irish Free State, Carney sided with the Anti-Treaty forces and was arrested several times.Despite her own time of imprisonment, Carney was not opposed to visiting her political friends during their times in prison. It was recorded that she visited Austin Stack in December 1918.

By 1924 she had become a member of the Labour Party. In the 1930s she joined the Belfast Socialist Party. Following the Civil War, Carney became a lot more disillusioned with politics. She was very critical and outspoken of Eamon de Valera and his governments. In 1928 she married George McBride, a Protestant Orangeman, former member of the Ulster Volunteers and fellow socialist. Ironically, the formation of the Ulster Volunteers had prompted the formation of the Irish Volunteers, of which Carney was a member. Carney alienated anyone in her life that did not support her marriage to George McBride. She continued to be involved in the trade union movement, working for the Irish Transport and General Workers’ Union.

A number of serious health problems limited her political activities in the late 1930s. Carney died in Belfast, Northern Ireland on the 21st of November 1943, and is buried in Milltown Cemetery. Her resting place was found years later and a headstone was erected by the National Graves Association, Belfast. An oration was done then by Belfast Republican, Liam Rice. Because Carney married a Protestant and former Orangeman, she was not allowed to have his name (McBride) on her gravestone due to the religious differences. They were married for fifteen years and George McBride never remarried after Carney’s early death.

In 2013, the Seventieth Anniversary of Carneys death was remembered by the Socialist Republican Party. Almost one hundred people attended as a short parade followed, marking an commemorating the work Carney did for the cause. She was placed in high esteem among the other hundreds of radical women, who stood up for what they believed in, regardless of the consequences they faced.

Album: Carney // County Down
Click here to see all thumbnails in larger format